The Museum has recently been kindly donated, 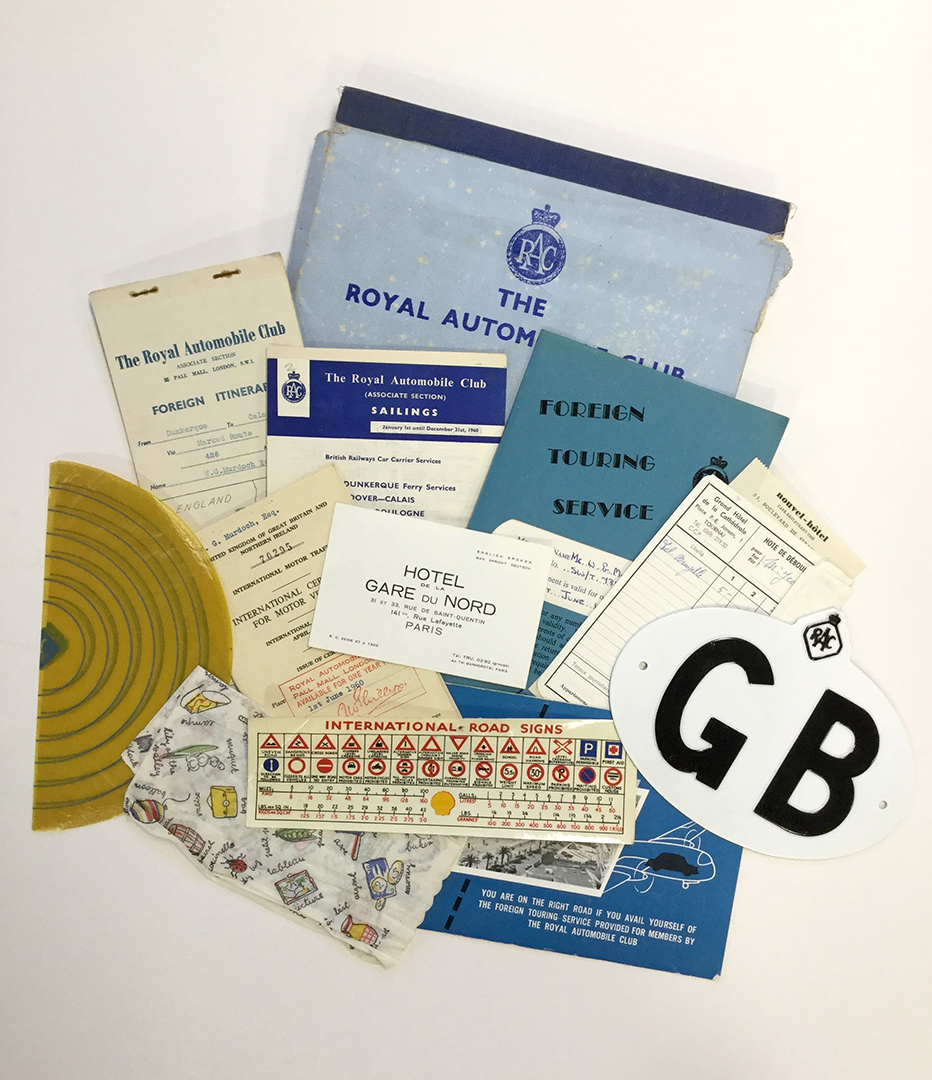 what can be described as a time capsule; in this case a blue wallet with the RAC crest containing receipts, tickets, a café napkin, a dashboard sticker showing international road signs and a whole heap of other ephemera relating to a trip taken by the Murdoch family of Yeovil to France and Belgium in June, 1960.

Here is an unused GB plate and a pair of transparent yellow discs – remember when French cars had yellow headlights – and a bill from the nouvel-hotel in Soissons for F78.75 – about £15.75t – which paid for two rooms, breakfast and a three course meal.

Fascinating though this is, the real poignancy of these items is why Mr Murdoch, Managing Director of a Yeovil garage, loaded his family into his Vauxhall Victor and made the journey from Yeovil to Soissons and Tournai. This story begins twenty years earlier when the 19 year old William Murdoch was a Wop/AG – a wireless operator/air gunner in a Bristol Blenheim IV light bomber of the RAF’s 59 Squadron, part of the Advanced Air Striking Force and based at Poix in northern France.

On May 18th, 1940, Mr Murdoch and his crew were on a reconnaissance flight to investigate enemy armour breaking through in the area of Gembloux in southern Belgium when they were hit by ground fire and forced to crash land. The pilot, Pilot Officer Durie and the observer, Sergeant Burns, were both killed, but Mr Murdoch managed to extricate himself from the wreckage and, after a series of adventures, was evacuated from Dunkirk before France fell.

Twenty years after the event, Mr Murdoch felt the need to revisit the crash site and the graves of his comrades. This proved a little more difficult than expected as the landscape had changed – a windmill and a convent had both disappeared – but with the aid of a local farmer, the crash site was identified and visited, along with the graves of the other crew in Tournai cemetery.

Thus concluded a trip rather different from the usual continental holiday, but which is still fondly remembered by Andrew Murdoch, son of William, who has donated these items to the Museum's archive.